Van Gisbergen praises consistency of team and is hungry to add more silverware as championship heads to Bathurst.
Posted on 22 November, 2021 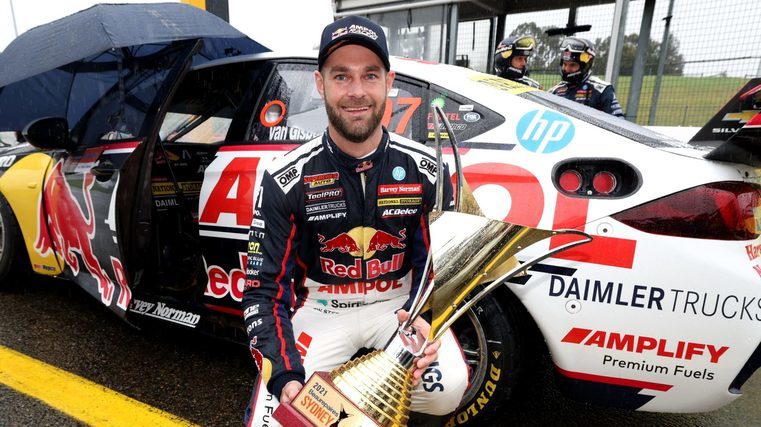 Shane van Gisbergen clinched his second Supercars drivers’ championship after race 30 of the 2021 season was washed out during downpours in Sydney.

The Kiwi previously won the title in 2016 and quickly emerged as the favourite for this year’s crown after winning the first six races of the campaign.

The final race of the Sydney SuperNight round on November 21 was delayed for 15 minutes because of bad weather.

Eventually, the cars got onto the track at Sydney Motorsport Park and circulated for five laps before the race was red-flagged and abandoned, which meant it was declared a non-race and no points awarded.

It gives van Gisbergen an unassailable 349-point lead over his closest rival, Red Bull Ampol Racing teammate Jamie Whincup, ahead of the season-ending Bathurst 1000 being held from November 30-December 5.

Van Gisbergen, pictured, says: “It sucks we couldn't put on a show, but it’s been an awesome time and super cool to win another championship. I'm over the moon.

“We haven’t been fast enough, but we’ve got the results and just been consistent and made less mistakes than others.

“We can now look forward to Bathurst with a weight off our shoulders and give it a red-hot crack to win the biggest race of the year.”

The 32-year-old is the 14th driver in Australian Touring Car Championship and Supercars history to win two or more titles.

He also helped Red Bull Ampol Racing to the constructors’ championship when he completed his 14th victory of the season in race 29 on November 20.