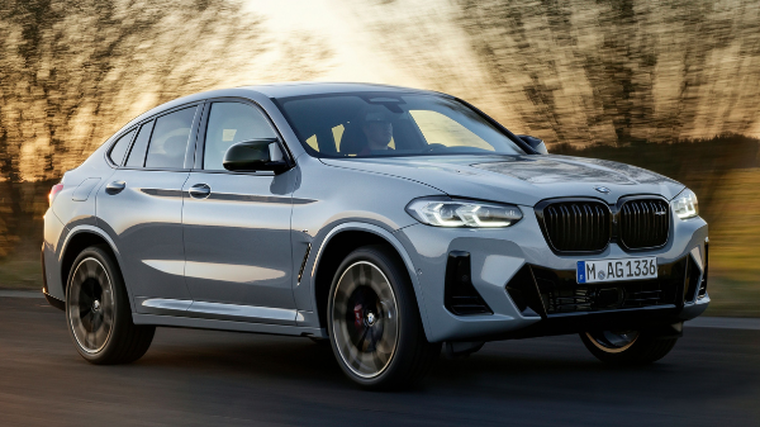 The new BMW X3 and X4 models, which feature a range of updates and improved interior equipment, will be arriving in New Zealand showrooms in the final quarter of this year.

Five variants of the X3 model will be available, including an all-electric iX3, and the front styling features a redesigned BMW kidney grille and narrower headlights.

New adaptive LED headlights and intelligent adverse weather lights eliminate the need for standalone fog lights, while ultra-long range BMW Laserlight systems with lighting capabilities of up to 650 metres are an option.

The M Sport package is fitted as standard to the X3 xDrive30e and optional on the sDrive20i and xDrive20d. The range-topping X3 M40i stands out with a distinct M double bar kidney grille design, 21-inch wheels and a “Two Teeth” tailpipe trim in black chrome.

The new X4, pictured, adopts the same front end as the X3 but is distinguished by having a different curved roofline.

Only the top of the range M40i will be available in New Zealand, which comes standard with the M Sport package.

On the inside, both models now feature the centre console from the all-new BMW 4 Series. A free-standing central control display with touch function and a 12.3-inch screen is fitted as standard.

Three engine variants are available for the X3 line-up in New Zealand, starting with a 135kW/300Nm two-litre, TwinPower Turbo for the sDrive20i and a 140kW/400Nm diesel for the xDrive20d.

A 215kW/420Nm combined plug-in hybrid powertrain is offered for the new xDrive30e., which delivers up to 46km of electric range on the WLTP cycle.

The new xDrive30e features a 12kWh battery and can be charged to 80 per cent in as little as two-and-a-half hours.

All engines are mated to eight-speed Steptronic gearboxes.

Other technological improvements mean BMW’s new Intelligent Personal Assistant is standard across the range, enabling a number of voice-activated commands.

Spoken instructions can be used to regulate the air conditioning, open and close the windows or change the driving experience modes.