Mercedes-Benz stretches display across the whole dash to benefit drivers and passengers.
Posted on 13 January, 2021 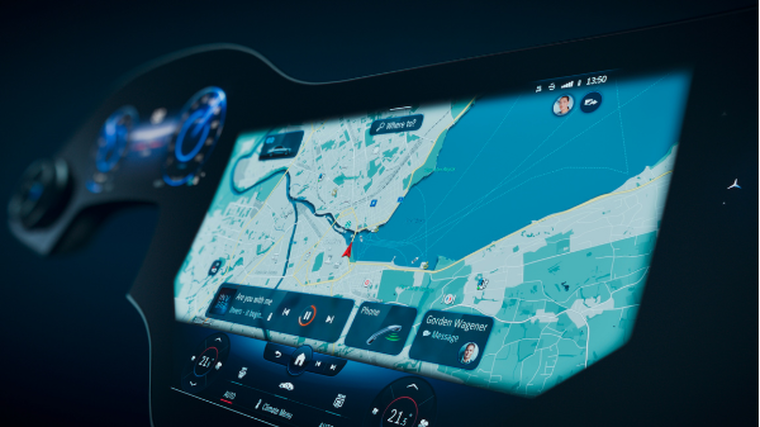 Set to make its debut in the EQS S-class all-electric sedan, the MBUX Hyperscreen system is the latest evolution of the marque’s MBUX central command centre.

Abbreviated from Mercedes-Benz User Experience, the system blends a nearly full-width screen with the infotainment, vehicle control and artificial intelligence (AI) functions of the second-generation MBUX that first appeared in the new S-class late last year.

It blends three independent screens to stretch more than 56 inches across the dash for a combined area of 377 square inches.

OLED (organic light-emitting diodes) are utilised for the central and front passenger display to provide a high-contrast image regardless of viewing angle.

Based entirely on voice and touchscreen commands, the MBUX Hyperscreen system eliminates any redundant controls, such as the touchpad found in the middle console on previous MBUX versions.

The portion of the display in front of passenger can operate independently of the centre, screen and instrument panel.

This allows passengers to enjoy informational and entertainment content of their own choosing to help take the drudgery out of long trips.

When no front passenger is present, this part of the screen becomes a decorative element showing animated stars in the Mercedes-Benz pattern.

Mercedes-Benz strived to simplify operation and reduce driver distraction by reserving primary-screen real estate for its “zero-layer” feature, which essentially keeps the most important applications available at the top of the driver’s field of vision, eliminating the need to click through multiple menus.

Additionally, 99 per cent of the system’s functions are accessible via voice command with most operations mirrored in the head-up display.

AI further streamlines operation by developing use cases for a given driver’s routes and habits, then proactively displays a desired function at the appropriate time for the user.

MBUX is also capable of remembering certain geographic-motivated operations. If a motorist routinely raises the suspension to navigate a steep driveway, the system will recognise the GPS position and remind the driver the next time it approaches the same location.

The system can store data and settings for up to seven unique driver profiles, and suggestions can be confirmed or rejected with a single click.

Motorists annoyed by the idea of constant reminders can switch the AI features off with a single push of a button while preserving the functionality of the navigation, phone, entertainment and vehicle control functions.

Mercedes-Benz has six new all-electric EQ models in the pipeline. The all-electric EQS sedan will join the petrol-engined S500 and S580 models as the third member of the flagship S-class line-up.

Previewed by the Vision EQS concept, the EQS is the first to utilise the new electric architecture designed for luxury and executive EV models.

The EQS will be produced at the marque’s Factory 56 in Sindelfingen, Germany, alongside regular S-class models.