The new Ford Ranger is more powerful and robust than its predecessors, with an EV version set to join the line-up.
Posted on 25 November, 2021 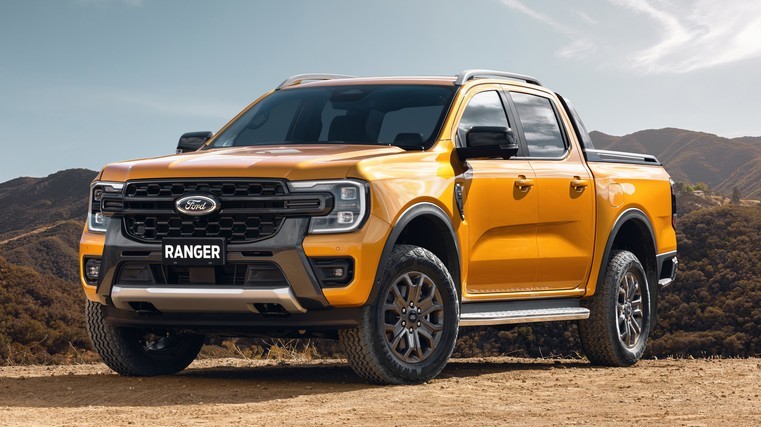 Ford has pulled the covers off its Next-Generation Ranger and is hoping to bolster its stronghold on the market with the introduction of a V6 powertrain and more off-road capability.

A new 3.0-litre V6 diesel engine tops the revised range, offering an improved 210bhp, and an electric powertrain is set to join the line-up at a later date.

The outgoing Ranger’s 2.0-litre turbodiesel engines will stay in the line-up, having undergone some minor changes, and will sit alongside a four-cylinder 2.3-litre petrol EcoBoost model.

Transmission choices include an updated 10-speed automatic gearbox complementing the current six-speed automatic, and there is also a permanent four-wheel-drive system.

Inside the cabin will be the latest SYNC4 infotainment system that is displayed through either a 10 or 12-inch portrait touchscreen.

The Next-Generation Ranger project was led by Ford’s Product Development Centre in Australia and its 2,000-strong team of designers and engineers worked with teams around the globe to incorporate the latest in Ford technology, capability and safety.

Graham Pearson, Ranger vehicle program director, says: “Our team was focused on one goal – to make this Ranger the toughest and most capable we’ve ever created. They put it through one of the most exhaustive global testing schedules we’ve ever developed.”

Ford also interviewed 5,000 consumers and held dozens of customer workshops to understand what motorists wanted from the latest iteration of the popular ute.

The Ranger will be available in XL, XLS, XLT, Sport and Wildtrak variants and common design features include a new grille, LED headlights, and bolder wheel arches.

Beneath the bodywork is an upgraded chassis riding on a wheelbase 50mm longer and a track 50mm wider than the prior Ranger.

Anthony Hall, Ranger vehicle engineering manager, says: “Widening the truck by 50mm may not seem like a lot, but it makes a huge difference, especially in the cargo box. It means that customers will be able to load flat some pretty fundamental items, such as a sheet of building plywood or a full-size pallet.”

Customer-focused improvements include a new, plastic-moulded bedliner, which helps protect the truck bed from scratches and owner’s knees from kneeling on a steel truck bed, along with extra cargo tie-down points.

The tailgate can also double as a mobile workbench with clamp pockets to measure, grip and cut building materials.

Meanwhile, zone lighting – controlled via the in-cabin SYNC screen or through the FordPass app – provides 360-degree lighting around the truck to provide customers better visibility around the vehicle.

The Next-Generation Ranger will be built at Ford’s manufacturing plants in Thailand and South Africa from 2022, with local specifications and pricing to be announced closer to arrival.