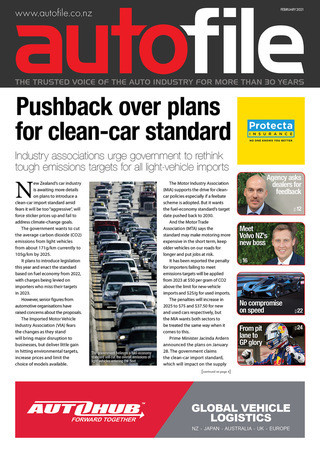 Climate change is the hot topic for the automotive industry amid a push for a clean-car import standard and a call to ban sales of newly imported petrol and diesel vehicles by 2035.

We talk to senior figures from across the industry to find out their thoughts on proposals put forward by the government and Climate Change Commission.

Leading industry organisations, including VIA, the MTA and MIA, fear the plans to slash emissions from light passenger vehicles are too aggressive.

Besides wanting any date for a fuel-economy standard pushed back, other concerns include increasing sticker prices and the potential for major disruption to businesses for little environmental gain.

The government wants to cut the average carbon dioxide (CO2) emissions from light vehicles from about 171g/km currently to 105g/km by 2025.

It plans to introduce legislation this year, enact the standard based on fuel economy from 2022 and start levying charges the following year for importers who miss their targets.

Meanwhile, the AA is pleased the government is investigating a biofuels mandate so what’s dispensed at the pump can become lower-emitting.

• Autofile also reveals how the Climate Change Commission is recommending half of all cars imported by dealers should be electric vehicles or plug-in hybrids by 2027. The commission is consulting on a draft package of advice to tackle transport emissions. It advocates banning sales of light vehicles with internal combustion engines by no later than 2035. Plus: The MIA and Drive Electric give their views.

• Dealers are being encouraged to have their say about a new one-stop portal created by the NZTA.

• The MTA’s Tony Everett has some top tips for dealers on keeping good paperwork, out-of-town sales, checking trade-ins, taking care with over-trade, selling on behalf and much more.

Autofile magazine – the first in print with the big news when it matters.