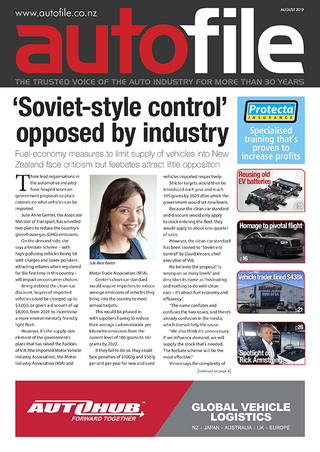 Three lead organisations in the automotive industry have heaped scorn on proposals to control what vehicles can be imported. The government’s “clean-car standard” would require importers to cut average greenhouse-gas emissions of stock crossing our border to meet annual targets. The idea has been criticised by VIA, the MIA and MTA – find out why.

Turners Automotive Group has appointed an investment group to carry out a strategic review of Oxford Finance. It will “consider alternative ownership options” as part of looking into how the whole of its business works.

VIA is developing an app to complement its online guide to stock that’s likely to be fitted with ESC ahead of a ban coming into force in March 2020. It’s a vehicle-by-vehicle database of Japan’s domestic fleet to help importers comply with the law.

2 Cheap Cars has been fined $430,000 after getting its customers to sign “blatantly untrue and misleading” warranty waivers, and running “tantamount to devious” adverts, says the case judge.

The fastest uptake of electric cars nationally has been in Dunedin, judging from the number owned per 1,000 residents – Henrik Moller opines why. And Vector is exploring the transformation of old EV batteries into power storage for homes and businesses.