Neighbours told to stay inside after blaze at wreckers sends flames and smoke high into the sky. PLUS – video
Posted on 08 June, 2021 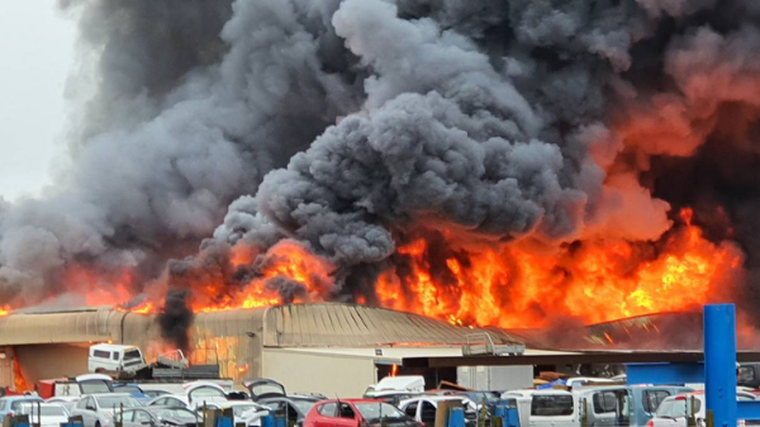 Investigators have trawled a devastated car yard in south Auckland for clues to a massive fire that engulfed hundreds of cars and destroyed buildings.

The blaze broke out at JCP Car Parts in Papakura at about 3pm on June 6 and was attended by nearly 100 firefighters as plumes of smoke were sent billowing into the sky.

Witnesses reported hearing a number of loud explosions from the car wreckers in Parker Street and neighbouring residents were told to stay inside and keep their windows closed.

At the peak of the drama, about 25 fire engines from across Auckland were at the scene as the flames covered an area of about 110 metres by 80 metres.

Firefighters, whose job was made harder by the risk of stacks of cars toppling over, had the blaze under control by about 9pm. Crews remained on-site overnight to dampen down hotspots.

A lawyer for JCP issued a statement to the NZ Herald and says the company is devastated by the fire but relieved there were no injuries.

“We are grateful to Fire and Emergency New Zealand for their massive efforts … in controlling and putting out the fire,” it adds.

“We are committed to our community in Papakura, and we are very sorry to our neighbourhood and our community for the disruption and inconvenience, and thank them for their support.”

JCP notes it is helping “in any we can” with the investigation into the source of the fire.