The Australian motor industry's web tool used to check whether a vehicle's airbag inflator is affected by the Takata recall has clocked up more than 1.2 million responses in the first week since going "live".
Posted on 09 August, 2018 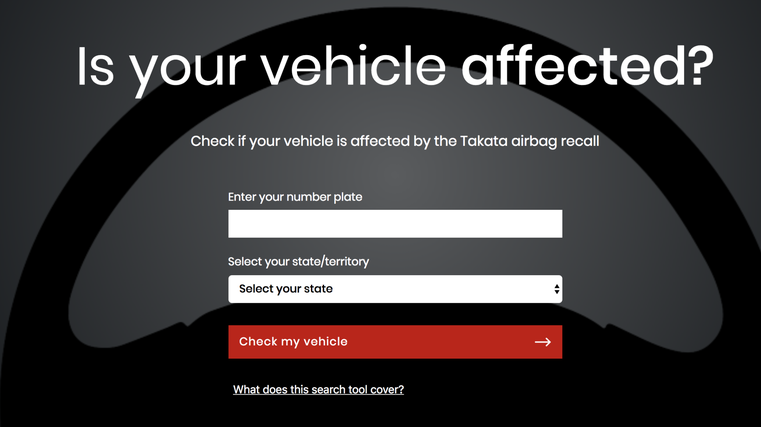 The Australian motor industry’s web tool used to check whether a vehicle’s airbag inflator is affected by the Takata recall has recorded more than 1.2 million responses in the first week since going “live”.

The website, www.ismyairbagsafe.com.au, was developed as a tool in which visitors only need enter their state and registration number to check whether their vehicle is affected by the recall.

The website and the web tool were developed for the Federal Chamber of Automotive Industries (FCAI) and its member companies. It is a custom-built product which was launched publicly on July 29 and supported by a national advertising campaign across newspapers, television, radio and digital media. It is the largest advertising campaign the FCAI has conducted on the industry’s behalf.

In the first week of the site going “live”, 769,841 unique website visitors performed more than 1.23 million registration checks. More than half of the visitors used mobile devices.

Of those who visited the site and checked on the status of their vehicle’s airbag inflator, around one in nine were found to be affected by the Takata recall and went on to receive advice about their next steps directly from their vehicle brand.

Over 5,000 people also used the text-based service which allows users without access to the internet to text the word TAKATA to 0487 247 224 and receive advice.

“We’re pleased how the public has responded to this important safety message and it is interesting to note that a large proportion of the website visitors are checking more than one vehicle,” said Weber.

“The campaign was specifically designed to both raise public awareness of this issue and to motivate vehicle owners to use our web tool to deliver a quick and easy answer.

“There are just over 3 million vehicles across Australia affected by the Takata recall and the industry is now about halfway through that task. There’s a lot of airbag inflator replacement work going on in dealerships right around the country.

“The Takata airbag recall awareness campaign will start on the radio later this month and will go out into regional areas around the country. The key message is the same: check your vehicle. And if you are contacted by your brand about the recall, it’s vital that you act on that advice promptly.”