Hyundai to reveal not one but three vehicles - a fully-electric design concept, the all-new i10, and its first-ever electric racing car - at the 2019 Frankfurt International Motor Show.
Posted on 19 August, 2019 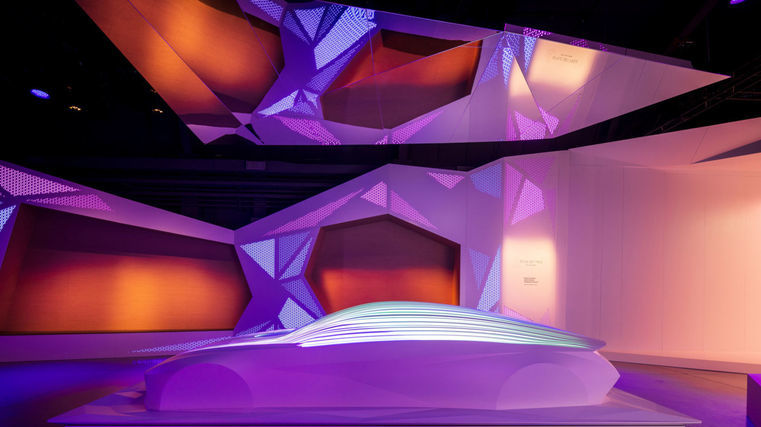 Hyundai will provide a glimpse into the future of mobility at this year's Frankfurt International Motor Show, which takes place from September 10 to 22.

Hyundai will illustrate this through its personalised in-car customer experience strategy for future electric vehicles under the banner "style set free". Pictured above is Hyundai's stage for its "style set free" presentation at the Milan Design Week

Hyundai envisions that future vehicles will offer customers more freedom to design their cars in a way similar to how people design their homes to better reflect their lifestyles. The company envisions that cars’ interiors will be more customisable also during its lifecycle.

In addition to the concept car, Hyundai will also be hosting a series of interactive displays to illustrate "style set free". These include "My Space", which allows visitors to interact with various materials to create a kaleidoscope effect, as well as "H-Space", which offers a personalised in-car customer experience.

“With the first full electrified concept integrating style set free, as well as our first-ever electrified race car, we are proud that Hyundai is once again showing a glimpse into the future of driving, while other manufacturers are still talking about it,” says Andreas-Christoph Hofmann, vice president marketing and product at Hyundai Europe.

“Meanwhile, we are also excited to present the all-new i10 which, thanks to a range of connectivity and safety features, will become the next success factor for Hyundai in Europe.”

Hyundai Motorsport recently teased its first-ever electric racing car, designed and built at the company’s headquarters in Alzenau, Germany. The vehicle will be exclusively unveiled at the motor show on the first press day.

Hyundai says it will herald a new era of motorsport for the company.

The All-New Hyundai i10

The all-new Hyundai i10 will also receive its public world premiere. The latest addition to the Korean car maker's i-range features a new-look dynamic design, which shows a contrast between its soft surfaces and sharp lines.

It also features a host of connectivity upgrades, including connected car and blue link®, making it a leader in its class, as well as one of the most full-featured safety packages in the segment. In addition to the standard model, Hyundai will also unveil a special version of the all-new i10.